To bi or not to bi

So you're tearing your hair a bit over whether to pick tha or is for a sentence, why everyone keeps giving you rules that don't quite work and why oh why in the first place should you have to pick?

First off, "why" is a legitimate question if you're curious as to the history. We'll set that aside for now. Why-oh-why does Gaelic need two of these on the other hand is less legit as a question. It's a bit like telling a date you *LOVE* them but they really need to do something about their nose... Their nose is part of what makes them them and if you can't live with the nose, then perhaps your dating for the wrong reasons... So this tha/is (it's technically bi vs is by the way) is just part of what makes Gaelic special. Not the same as French and Spanish. Part of its charm. So learn to live with it or even better, love it.

It's not actually a hugely difficult rule but there are a few grammatical concepts you need to master before the rule becomes simple and universal. I'll simplify slightly so please no definition nitpickers!

1. What's a subject? Well, in the grammatical sense, it's the main actor of a sentence, the thing or person carrying out the main action. It can be a name (e.g. Jamila), a noun (e.g. drongo), a pronoun (e.g. she): Jamila went to the shop. In the absence of the '32, Jamie decided to open a bottle of the '35. The flipping drongo learned how to mimic my alarm clock. She is a space pirate.

2. What's a predicate? Setting aside the main verb, the predicate is the bit of the sentence that tells you something about the subject. In English, which was Subject-Verb-Object word order, it usually is the bit that comes after the verb. It's what comes after you've answered the question of who or what did it? and did what?: Jamila went to the shop. In the absence of the '32, Jamie decided to open a bottle of the '35. The flipping drongo learned how to mimic my alarm clock. She is a space pirate.

Not hugely difficult, admit it!

Yeah but how does that help me?

So when you have verbs like learned, decided or went, the question of whether you need bi or is doesn't arise because your main verb will be learn, decide, go and so on. The conundrum only arises when you run into am, are, is, was, were etc. Don't scoff, this narrows down the number of cases where you have to go hunt for the predicate.

The rule is this:

The first two are really easy. Look for the subject and verb and then check if the next word. If it's a name or pronoun, case closed:

The next case, noun, isn't too hard either. The important thing to remember is to ignore articles (a, an, the), numbers (one, two...) and possessives (my, your, his...):

The last case is a little more tricky because it can be quite long, a noun phrase. But essentially that's a phrase built around a noun. Here's a classic example:

Well, most other things, for example adjectives:

One important one that is potentially confusing is prepositional phrases. That's a bit of sentence that's built around a noun but starts with a preposition (on, at, through...). Those do not count as nouns or noun phrases, not the way Gaelic looks at it:

This is also the reason for the seeming exception in sentences like Tha mi 'nam oileanach. If you translate this literally i.e. I am in my student, then you see why you need tha here: it's because in my student is a prepositional phrase. So it's not an exception, it's just that in this particular construction, Gaelic does not align with English in the way something is expressed at all. Not that it should have to of course but in sentences where you have to decide between these two Gaelic verbs bi and is, English and Gaelic mostly pattern the same way, I took the liberty of explaining the way this works from the English point of view. It's just easier to work out for most learners at that stage.

There's a few additional points I'll add at a later point (mainly the exception you get in so-called cleft-sentences like bu mhór am beud), but in essence, this is it.

In case you were wondering, the reason why most other explanations don't work well is because they try to sidestep the issue of what a predicate is. But unfortunately, the question of the nature of the predicate is what determines whether you need bi or is so there will be plenty of cases where these other workaround rules just don't work.

I've done you a summary as a flow chart (feel free to copy/save/share): 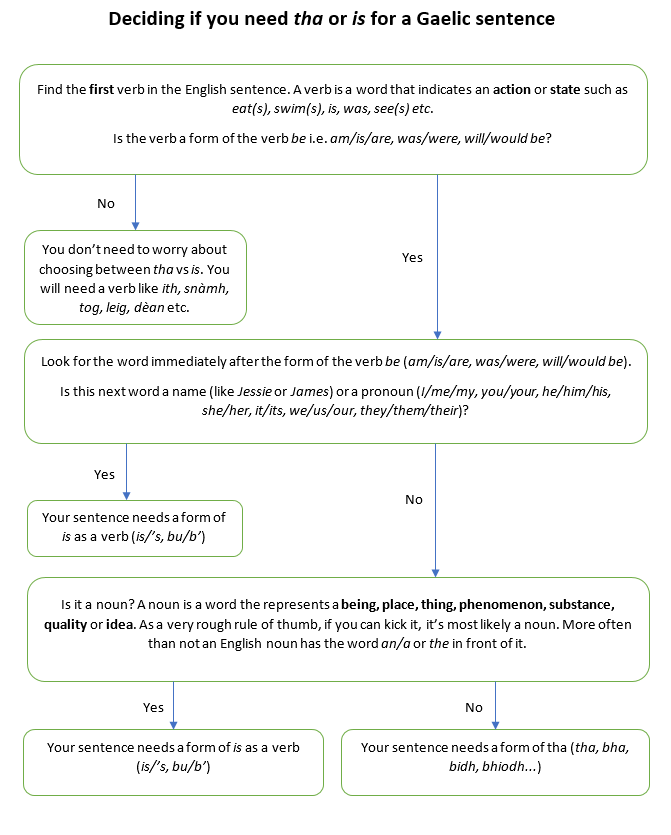