Pre-aspiration or What the h in mac is about

This is both a fascinating and slightly boring topic. Boring because it is probably one of the most often cited features of Gaelic. Fascinating because ... well, you'll see.

Aspiration is the puffing sound heard, for example, in English, after p, t, c, when those letters are at the beginning of words. Pre-aspiration is a feature that arises in certain languages that insert aspiration before such sounds when they occur in the middle or at the end of a word.

The weird thing about pre-aspiration is that it's a Sprachbund feature. That means it's a phenomenon which occurs in a specific geographic region where a number of unrelated languages are spoken but those languages all share a specific feature. For example, Gaelic is infinitely closer to Irish and Manx yet it shares pre-aspiration with Icelandic, Sami, Greenlandic, Norwegian, Siksika (also known as Blackfoot, a native American language), and a few other languages on the Arctic Circle:

Let's have a closer look at what happens in Gaelic: 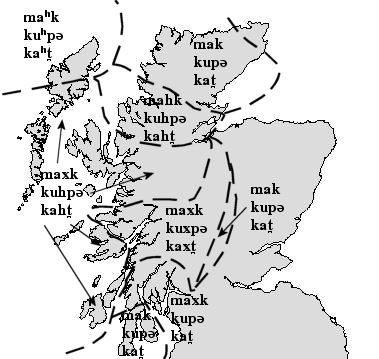 This is where the weird stuff begins - but here are a few basic rules for what to do when.

Thus you should pre-aspirate as follows:

So what are the weird bits? Well, pre-aspiration is rare among the languages of the world and it's most frequent around the Arctic Circle. Another weird bit is that pre-aspiration is "staggered". That means that [xg] is the sound most likely to be pre-aspirated and most strongly aspirated. And also, if pre-aspiration occurs before [hd] it must always occur before [hb]. Look at the map above and have a look at pre-aspiration in Bute, Cowal & North Kintyre to see [maxk] [kupə] and [kat].

But why? What for? Interesting question, and next time you meet a few linguists, ask them that question and watch them work each other into apopleptic fits. It's interesting because there are several theories, all of which have merit, but somehow none of them is fully convincing. Not yet anyway. Some claim that pre-aspiration is a feature spread by Norse, but that kind of worries Blackfoot linguists. Others say pre-aspiration derives from geminate stops (long consonants, in other words). But if pre-aspiration is common and widespread, why only around the Arctic? And some linguists base their theory on structural phonology ...

But that last bit needn't worry you as a learner or speaker of Gaelic as long as you know what to do when.