The History of L N and R

Once again, we have to go WAY back...

As far back as Common Gaelic actually, which had a lovely balanced system of sonorants - L N and R:

To begin with, the *r means that there was an initial slender r; but, phonetically, we have no idea what that was. It's a mystery.

Taking a big leap in time, most modern Scottish Gaelic dialects have evolved the following system:

This creates a small problem since the system is now 3 sounds short and somewhat unbalanced. And how do you deal with lenition? Well ... two ways.

What does this mean practically? For example, the l in long and balach now sound exactly the same and when you lenite l in mo long there's no sound change. However, an initial [Lʲ] still lenites as it did in Common Gaelic, so leabaidh becomes mo leabaidh [mə lebɪ].

On the other hand, both initial n sounds now lenite to weak [n]:

Initial slender r has merged with initial broad r which leaves only one initial r sound, the strong [R] which lenites to [r]:

Sooo ... what does this have to do with initial consonant clusters? Lots. The second consonant is considered non-initial, meaning in Common Gaelic it would have had the "weak" pronunciation. But since we have lost two of the "weak" sounds, we have to make do somehow. So, the initial broad l has to fill the gap left by the departure of non-initial broad l so [bɫ] becomes [bL], blàth [bLa:], blas [bLas], and so on. In essence, the old system is perpetuated wherever possible except where that is no longer possible due to a loss of some sounds. So, today, this is why the system is a bit messy.

And it's not the same everywhere of course...

Incidentally, not all dialects have evolved the same system.

Ulster Irish retains the most complete set of sonorants amongst the Gaelic languages and dialects:

And looking at Scotland:

and most others have:

A word about writing lenition

One of my pet peeves. Teachers will often tell you that L N R cannot be lenited. Which is clearly not true as you just found out. Though in their defence, I will point out few have had any training in teaching this stuff and it's pretty hard core phonetics and phonology.

Anyway, what they mean is that the writing system does not show the lenition of L N R by adding the h. So while cat becomes mo chat, leabaidh stubbornly remains mo leabaidh. For some reason, writing lenition on L N R never caught on though you see it here and there. For example in the first Scottish Gaelic Bible translation, they are written as łṅṙ: 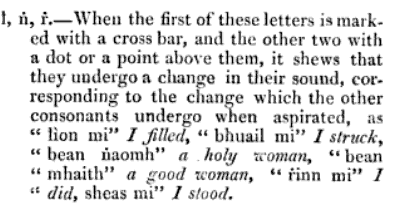 But as I said, it never caught on. So just remember that L N R do lenite. You just don't get the h.