I'm sure you've come across mysterious constructions with agus stuck right in the middle of them. Such a sentence could look like this: bha agam ri dol a dh'obair is mi cho tinn ris a' chù.

For once, the explanation of how to translate this and how to use it is simple.

Gaelic allows the speaker to juxtapose two concepts in a sentence and link them together by using is or agus. It is then up to the listener to infer the meaning. Before you get out the baseball bat, that just means you take two phrases, connect them with is or agus, and leave the listener to determine the relationship between the two phrases. No kidding.

The nice thing about this is that you can make quite complex and varied statements using the same construction. The only problem is that you have to be careful you don't make statements which are too ambiguous. The above most likely translates as "I had to go to work even though I was so ill". 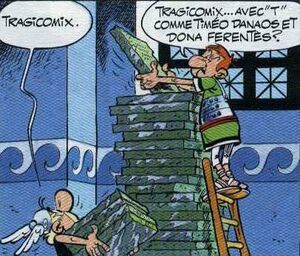 Without a given context, some of these sentences are more ambiguous than others. Consider bha mi a' tuiteam 'nam cadal is ceòl san t-seòmar eile. That could either mean that you were falling asleep because of the music (maybe it was jazz...) or that you were falling asleep but music in the other room kept you from actually sleeping. However, in speech, phrases without context are rare.

Gaelic isn't unique in having such a multi-function approach to the word "and". Latin et normally means "and" but it can also double up as "though, even if". As in the famous Latin expression timeō Danaōs et dōna ferentīs - "I fear the Danaans, even though they bring gifts". In German und "and" can also be used to put two events into a sequence, for example Er fuhr nach Thailand und ging schnorcheln means "he went to Thailand and (then) went snorkelling" with the implication that he did the snorkelling in Thailand. So German und here, like in Gaelic, juxtaposes two events which are somehow linked more closely than simply a list of events i.e. it's not the case our lucky friend went to Thailand and then, totally unrelated to his time in Thailand, went snorkelling.

Isn't that the copula?

No. Just as a reminder, the copula is the verb is that's used when the predicate is a noun or noun phrase, for example in is mise do nighean. There's an easy test to determine if is is the copula. If it's the copula, then we should be able to turn is into its past tense form bu. But, clearly a sentence like *rinn mi mearachd bu mhi 'nam ghille òg is ungrammatical. So it can not be the copula.

How about the 's in adverbs, prepositions and so on?

Other examples would be:

So how do I translate it?

Well... obviously that depends upon the interpretation. It's one of those words you can't really give a list of translations for, beyond and. It could be because, it could be although or in spite of ... depends.

It's not that crazy. Other languages use the opposite method i.e. they just give you a blank and you have to imagine the conceptual link. Think of that quote by Julius Caesar, veni vidi vici. It's most commonly translated as I came, I saw and I conquered. Now regardless of your Latin skills, I challenge you to find the Latin word for and (-que) in there.

Or an English expression like (say when talking about a headache) - it comes, it goes where you have to interpret these two phrases as being linked by and. At least Gaelic gives you a headsup.

That's it really. Whenever you come across such an 's or agus in a place where you'd not expect one, think of it as an unspecified conceptual link.