We won't go into the discussion of whether this feature is Norse or Martian because unless you are hoping to become a historical linguist, it doesn't matter.

So what can we tell you about this strange [ʃ] that pops up in Gaelic? 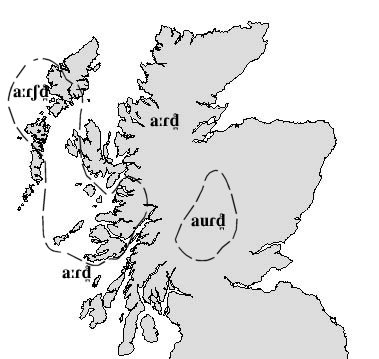 Beyond that, there doesn't appear to be a clear rule, but we'll research this further and see whether there actually is a rule.

For learners, it seems to be a good guideline to insert [ʃ] both in rt and rd groups in stressed syllables, that's to say first syllables. That won't sound wrong to a Gael's ears even if he does not pronounce the intrusive [ʃ]. Unless you're desperate to learn a particular dialect, which we don't recommend, you'll have to memorise your chosen dialect's rt and rd words. As far as we can see, the option to use [ʃ], or not, does not appear to be rule based.

To listen to some examples, check our Fuaimean na Gàidhlig section.